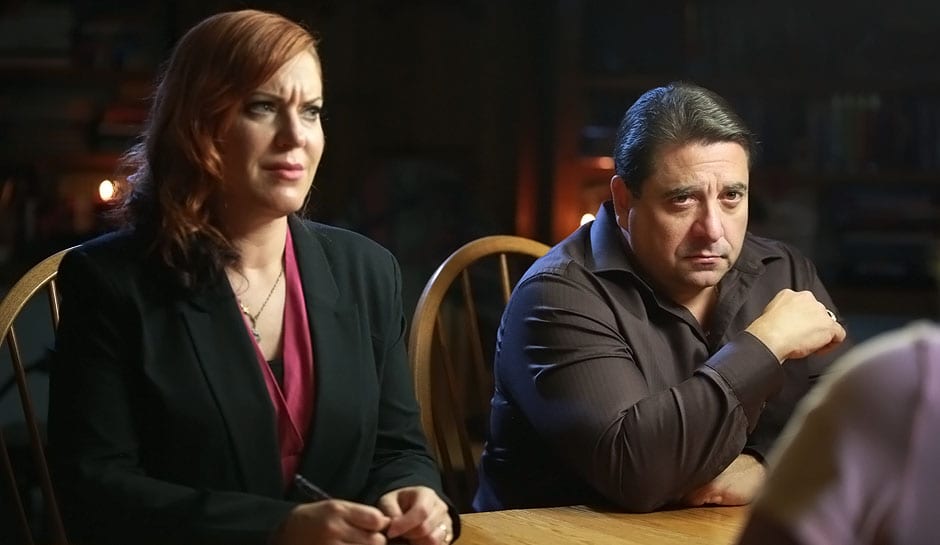 Travel Channel’s popular series ‘The Dead Files’ is making a jump to the channel’s Sunday night lineup and April is packed with some intriguing investigations.

Physical medium Amy Allan and retired homicide detective Steve DiSchiavi take viewers on their investigations into the paranormal in a much different take on ghost hunting shows.

The next five episodes of the show have been revealed (h/t Dread Central):

“Evil Descends – Murrieta, California” – Premieres Sunday, April 1, at 8pm ET/PT
Steve DiSchiavi and Amy Allan travel to a home in Murrieta, California, where a mother worries that her husband’s dealings in witchcraft have led to the paranormal activity that’s tearing her family apart.

“Inviting Evil – Berthoud, Colorado” – Premieres Sunday, April 8, at 8pm ET/PT
A terrified woman calls on Steve DiSchiavi and Amy Allan to investigate claims of vicious paranormal activity at her Berthoud, Colorado, home. During her after-hours walk on the property, Allan encounters a demon set on tormenting the living and a malevolent shadow person.

“Innocence Lost – Elkview, West Virginia” – Premieres Sunday, April 15, at 8pm ET/PT
Steve DiSchiavi and Amy Allan travel to West Virginia to meet a terrified mother who fears the paranormal activity tormenting her family was brought on by the birth of her youngest son. The investigation leads to the discovery of a vortex where entities come and go.

“Dark Thoughts – Waterford, Connecticut” – Premieres Sunday, April 22, at 8pm ET/PT
Steve DiSchiavi and Amy Allan travel to Waterford, Connecticut, to investigate a recently separated mother’s claims that the paranormal is attacking her and her children. Allan discovers that the key to what’s haunting the living may not necessarily reside with the dead.