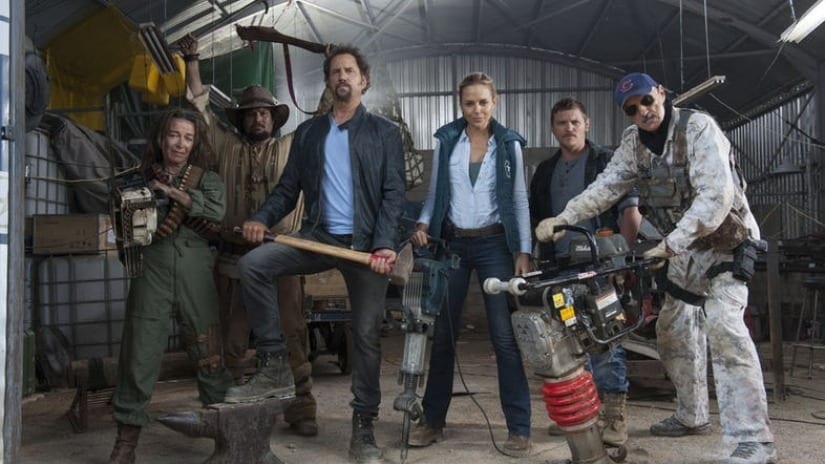 Tremors has had a long life, and appears to have many years ahead, but Gross believes there are several reasons behind the franchise’s longevity.

“I think one of the thinks that has made Tremors so enduringly popular for so long is the fact that it crosses, it touches a lot of genres” Gross said.

It’s also a comedy. We know that it’s quirky and strange, it’s a monster movie on top of that, and then there’s action/adventure. There’s so many things it touches on.

Finally, i think, one of the things I think it enjoys, is it takes place among people who have lived a little bit “off the grid”, and whatever Americans think about themselves, and I think there is still that romantic notion that we’re all these rugged individualists, we may be mortgaged up to the neck and have several cars, and payments, and go to work every day in a 3-piece suit and a tie, but we like to think of ourselves as these rugged individualists who live off the grid.

Of course, nobody exemplifies this more than Burt Gummer. So, it’s that rugged, American individualism that settled the West and opened the continent, and i think that’s a part of the American iconic-history, and how, in some ways, we still believe in ourselves.

I think that is all part of the romance of ‘Tremors’ and why it’s endured as long as it has.”

Gummer is an easy-to-like character that has lasted the test of time throughout the series, a clear fan-favorite, and Gross

“Burt is likeable, and he is someone who can easily become unlikeable. The way these movies are structured, Burt gets in jams, like everyone else. He thinks he is the smartest person in the room and then he finds out that things turn against him and he ultimately winds up, occasionally, with egg on his face.

For all his preparation, for all his feeling of control, control is often times rested from him by chance and fate, and you find him like a lot of shmos with his pants down around his ankles, and he’s looking like an idiot.

I think that people can relate to him. For as hard as he tries and he thinks he’s in control of things, that control is taken away from him, and i think that’s one of the things that helps to make him human.

For a lot of fans, a new Tremors movie is a continuation of a story that they have followed since the very beginning, while other may be just getting back to the film now, after seeing the original years ago.

Gross says that fans who have only seen the first film, will find a lot of familiarity with Tremors 6.

“If you’ve only seen the first film, first of all you’re going to find that Tremors 6 starts in the very same places as the 1st film did, in the town of Perfection, Nevada” Gross explained.

“A general store called ‘Chang’s Market’, which was featured in the first film, so you’ll find yourself back in some familiar places.

You’re also going to find some homages to the first film. A few lines, even a few characters that are going to take you back a few years.

So, in that respect, I think you’re going to find yourself in some familiar territory, as well as find some new things going on.

The person who has only seen ‘Tremors’ will feel right at home.”

With all the excitement surrounding ‘Tremors 6’, rumors have already started circulating regarding a ‘Tremors 7’.

“Universal NBC, we’ve had several meetings concerning a ‘Tremors 7’. It’s not a sure thing, it’s not guaranteed, and God only knows if it will happen” Gross said.

“But, if that want to pull that trigger, they want their weapons fully loaded and lined up. So, we are discussing story lines, plots, characters, things like that, and we’ve had one or two meeting where we’ve actually begun to discuss that.

The rumor is correct in that we are talking about it. Whether it gets made or not is something over which I have very little control. That has more to do with accountants, and bean counters, and how well ‘Tremors 6’ does and if they feel there’s an audience out there.

If there’s a good script and there’s a great storyline for Burt, then I would be there in a minute” Gross stated.

“As long as I can keep my health and my agility, I would enjoy doing that. There’s also fun in watching Burt grow old. It may be fun making him grow older on screen, so that he has to change what he does, he has to think differently, he has to think on his feet differently because he can’t rely on some of his old tricks.

We do have some idea for Burt for Tremors 7, one that’s been on my mind for a long time, and we will see if we can pull it off. He would still be fit, but, in every one of these films we try to put some personal challenges in front of Burt, not just professional challenges. He’s a great hunter, he knows what he’s doing as far as monsters are concerned.

Personally, we like to throw some more hurdles in front of him.

In ‘Tremors 5’ he has son out there, a blood relative, whom he knew nothing about who suddenly wants to spend time with him. That was a hurdle because for a man as misogynistic and as much of a loner as he is, spending time with another human being can be quite painful.

In ‘Tremors 6’ we’re throwing him some obstacles because he’s having to give up some measure of control. For a man who loves being in control, for a man who loves to micro-manage things, what is it like for him to have to cede control to someone else?

That is a great hurdle.”

According to the ‘Tremors 6’ synopsis: “Burt Gummer suspects that giant worms are being utilized as weapons at a research facility in Canada. He soon finds himself in a race against time to create an antidote from one of the creature’s venom to save his own life.”