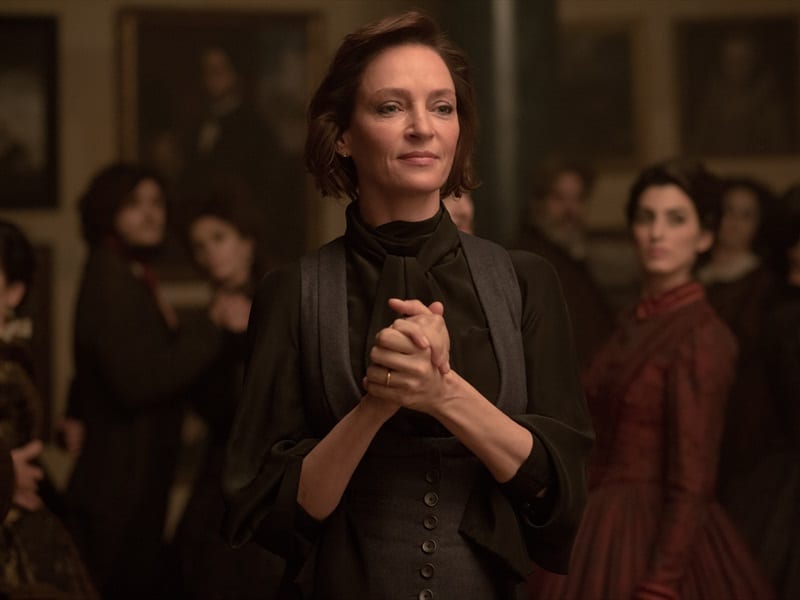 A stellar cast headlines Rodrigo Cortes’ ‘Down a Dark Hall’ which is now available on VOD.

The movie tells the story of: “Five emotionally fragile teens are committed to Blackwood, a mysterious school for gifted girls. Mesmerized by the intense head mistress Madame Duret, they think they have found a place where they can finally flourish academically and artistically. The mystery deepens as they break through layer after layer of misdirection to discover the true, horrifying purpose of the school.”

Katherine (AnnaSophia Robb) is problematic at school and it leads her mother, and uncomfortable stepfather, to enlist her in the Blackwood Academy with the hopes that the secluded school can help with the behavior issues they are experiencing with Katherine.
Katherine arrives to the school, which is large and rather empty, aside from the school’s staff, and the arrival of 4 other students, Izzy (Isabelle Fuhrman), Veronica (Victoria Moroles), Sierra (Rosie Day) and Ashley (Taylor Russell) who also have their own issues.The students are greeted by the head master, Madame Duret (Uma Thurman), and discover that they had been specifically, and purposely, chosen to attend the school.

Music, Math, Literature, and Art are the main classes and each student, with the exception of Veronica, find a class that brings out a hidden talent.

It doesn’t take long for the strange occurrences to start, as figures, faces, and shadows consistently lurk in the back of a good number of scenes, with a few jump scares to boot, but the film takes 30-boring minutes to get rolling towards the fun stuff, that isn’t very fun.

The story develops at a much quicker pace, assuming the slow pace of the beginning of the film didn’t put you to sleep, and the teens start having their own personal, yet terrifying, experiences of the paranormal within the house.Eventually, Katherine leads the way to uncovering the dark secrets of the academy, and discovers the true purpose of why each girl is there, which is sinister.

If you’re looking for scares, this movie has a few good jumps, and a creepy tone that will keep you interested, but the first 30-40 minutes of the movie is a hurdle you need to jump in order to get to the meat and potatoes of the film.

After a rough start, the film manages to recover and save itself from being completely terrible, to ending up being passable, although the story itself can be too convoluted for it’s own good.

Fright Nerd Score
35 frights
0 Users (0 votes)
Summary
After a rough start, the film manages to recover and save itself from being completely terrible, to ending up being passable, although the story itself can be too convoluted for it's own good.
Fright Nerd Score35
What people say... Leave your rating
Sort by:

In this article:Down A Dark Hall