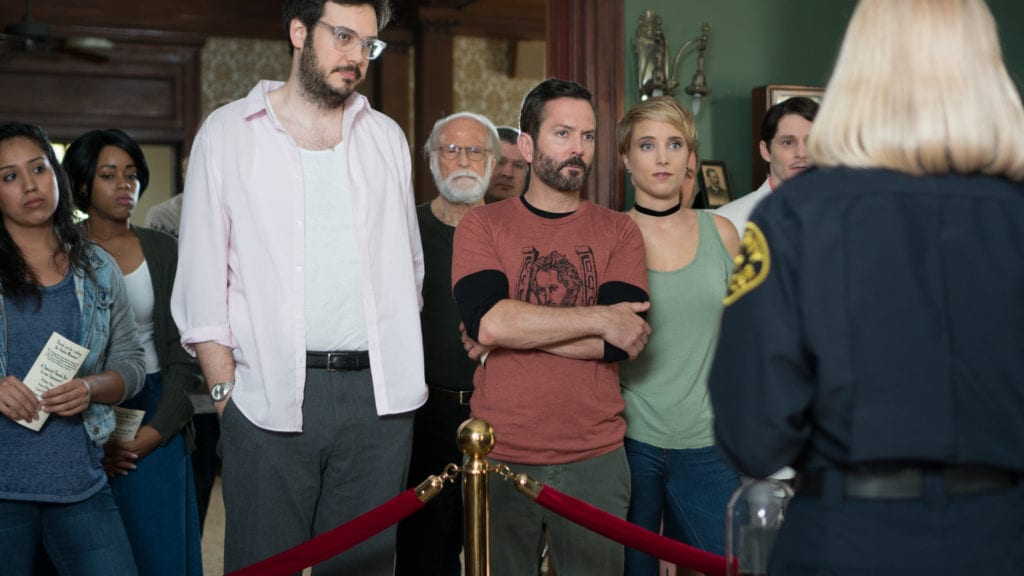 If you’re a diehard horror fan who is looking for ridiculous fun, over the top gore, and a damn good time, then the Sonny Laguna and Tommy Wiklund directed ‘Puppet Master: The Littlest Reich’ is perfect.

The film’s synopsis says; “A man sells a nefarious-looking puppet at a small-town convention for some quick cash. Terror soon strikes when an ancient evil animates the other puppets and sends them on a bloody killing spree.” And it delivers on the gore!

The film starts off with a backstory, showing Andre Toulon (Udo Kire) entering a bar and chatting up two creeped out women, a bartender and a patron, who’s romantic relationship revolts the old Frenchmen, and leads him to murdering them and embarking on a devious plan that comes into play years later.

Toulon flees the murder to return to his mansion where he pursued, and murdered by two police officers, one of which is Carol Doreski (Barbara Crampton).

Edgar (Thomas Lennon) returns home to a lukewarm welcome from his parents after a divorcing his wife, and find a mysterious, yet evil-looking doll, in his brother’s room. When his parents offer him no real answers, he does some more investigating to find out about a convention related to Toulon, and invites his new girlfriend, Ashley (Jenny Pellicer) and his co-worker Markowitz (Nelson Franklin) to travel with him to attend, and sell the mysterious doll he found in his brother’s room.

The trio arrive at ‘The Brass Buckle’ a hotel that is hosting the convention and find many more people, like them, who are in possession of a doll, and intrigued by the history of the infamous death of Toulon. They learn about a tour of the Toulon estate given by officer Carol Doreski, who provides her first hand account of the epic confrontation that led to Toulon’s death.

From there, the movie takes off and delivers ridiculousness that is comical, entertaining, and fun.

While the script, or the story, won’t knock your socks off, the movie doesn’t take anything serious, targeting on gore and entertainment that befits a dedicated horror fan.

If you’re looking for mindless fun, this is the ticket, as ‘Puppet Master: The Littlest Reich’ is just that, and a bit more.

Fright Nerd Score
55 frights
0 Users (0 votes)
Summary
If you're a diehard horror fan who is looking for ridiculous fun, over the top gore, and a damn good time, this film is perfect for you
Fright Nerd Score55
What people say... Leave your rating
Sort by: