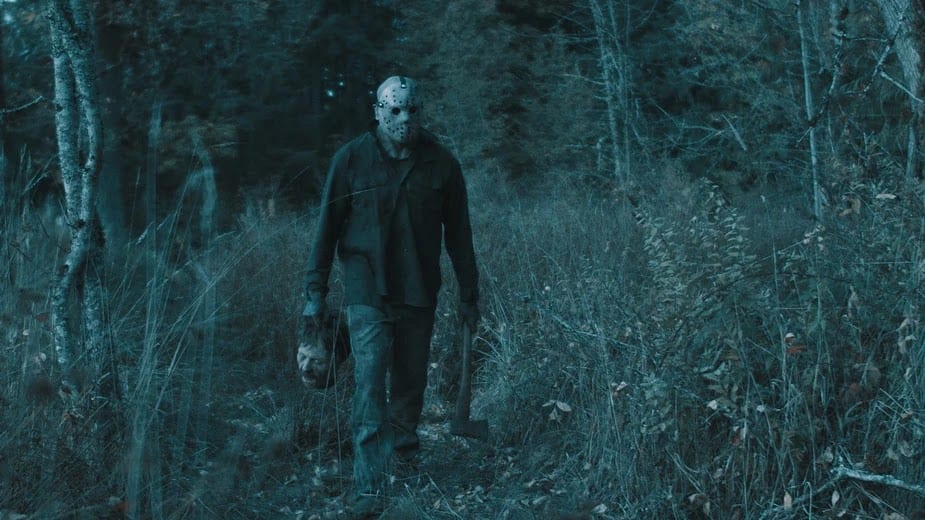 Earlier this month, a Friday the 13th fan film made some noise for generating some buzz, ‘Jason Rising’ and it immediately caught our eye.

Fright Nerd had chance to talk with the man behind ‘Jason Rising’, James Sweet, to discuss his promising project.

“Jason Rising has had many revisions over the past year” Sweet said, in our exclusive interview.

“The final idea stemmed  from some films that I found important in how they we’re made and their execution such as, the original Predator, from Dusk til Dawn.

These films got you hooked without showing the monster initially. That being said one of the other important aspects I wanted was to have people connect with the characters, good or bad.

Sure, you can kill a character for the sake of showing off a kill but if you don’t connect with the character then you aren’t emotionally charged which in my opinion is why we see films in the first place for the emotional ride.”

According to the film’s description, Jason Rising “is a story about Officer Pete Daltry on the hunt of a fugitive on the run after escaping from the Wessex County corrections farm and headed in the direction of Camp Crystal Lake. He is accompanied by two agents from the fugitive recovery team but when they enter the hollowed grounds of the camp they find out they are the hunted.”

Right now, there is an IndieGoGo page up, to drum up support to make this fan film the best it can be. You can see that here.

The feedback for this version of Jason Voorhees has been positive, as it seems to tell a new story of Jason’s chaotic reign over Camp Crystal Lake.

Just like many of you, Sweet has been a diehard horror fan, and a fan of the Friday the 13th films.

“Well I started my infatuation with Jason in middle school by sketching pictures of Jason and falling in love with horror in general” Sweet said.

“As a 13 year old reading magazines like Fangoria and Gorezone was always one of my greatest past times, long before the internet. I remember ordering  (by mail) a hockey mask from an add out of the back of one those mags. It wasn’t the quality replicas are today but when that box finally arrived it was an amazing feeling.

I remember coming home from middle school watching the Final Chapter over and over again. Part 2 was always a favorite as well. I think these films are like time capsules as I get taken right back to my childhood every time I watch them. The first appearance of Kane Hodder was amazing as well. I saw part 7 in the theaters when it released and the sleeping bag scene blew me away!”

‘Jason Rising’ is hoping to stand out as one of the best fan films, and it’s a goal of Sweet’s to create something memorable.

“When I finally decided to do a Friday fan film I told myself I should research some other fan films to see what I liked or didn’t like. This was about 2 weeks before NHA was launched on youtube.

I watched the trailer and got excited to see a high quality fan film. Vincente Disanti and I have had several conversations about NHA and Jason Rising. He is a trailblazer for all the fan films coming out.

As far as what sets us apart is the classic look of Jason we’ve integrated with a dead skin tone. Because the human aspect of Jason one of the most frightening as Ted White was my teenage Frankenstein. I wanted to combine the dead version with the old. It’s a fine balance.”

Sweet is aiming to make his mark, and make memories when the film officially launches.

“When I spoke with Robert Blanche and Karl Whinnery about doing this project I wanted it to be a great experience all around” Sweet said.

“Not just to make a great fan film but to have great memories in its creation. We are putting our hearts and souls into this film. What happens when it finally launches is anybody’s guess. ”

Sweet is currently focused on this project, but he may have other horror-related fan film ideas in mind for his next project.

“That’s always hard to answer when you’re focused on one thing for a long period of time. I always said if I was going to do any other fan films aside from this It would be a THEY LIVE fan film. Such a classic!!! But who knows where the road goes once Jason Rising is launched, we just want to be able to sit back and enjoy the film along with the fans we made it for.”

Fright Nerd and Gamactica present ‘Jason Rising’ directed by James Sweet. Be sure to visit their official website.

In this article:James Sweet, Jason Rising