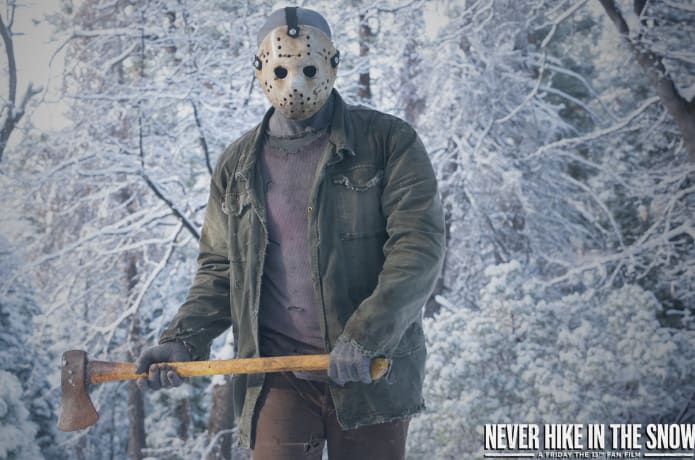 For those of you who like a good fan film, you may have caught ‘Never Hike Alone’, which I reviewed and enjoyed when it was release over a year ago. Now, the team behind that film is back with another Friday the 13th fan film ‘Never Hike in the Snow’.

Making this more fun for longtime fans of Friday the 13th is Thom Mathews, who played the adult Tommy Jarvis in the films and in the game, is set to star alongside Vincent Guastaferro and Courtlan Gordon.

According to the rundown: “Set three months prior to “Never Hike Alone,” “Never Hike in the Snow” follows the strange disappearance of Mark Hill (Courtlan Gordon), a Crystal Lake resident who went for a hike in the dead of winter and never came home. As Local Wessex County Sheriff Rick Cologne (Vinny Guastaferro) and Deputy Allen Mabry (Bryan Forrest) search for answers, town local Tommy Jarvis (Thom Mathews) believes that his old nemesis Jason Voorhees (Vincente DiSanti) is to blame. Will Diana Hill (Anna Campbell) ever see her son again, or will her son become another lost victim of the cursed camp? (30 min est) ”

The film is expected to drop on October 13th.

Check out the trailer below, and their IndieGoGo page.

In this article:friday the 13th, Never Hike in the Snow, Thom Mathews