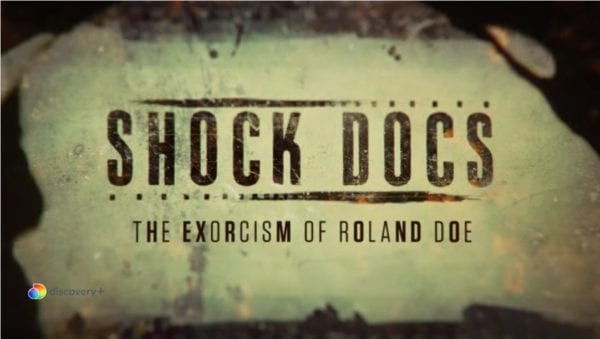 Hollywood is known for it’s over-the-top horror movies based on exorcisms, kicked off by the classic film ‘The Exorcist’, but there is a big difference between that Hollywood magic and what goes on when cameras aren’t around for a real-life exorcism.

A Shock Docs seriesentry heading to Discovery+ on February 5th explores those differences, and now we have a clip from The Exorcism of Roland Doe’ to get a sneak peak at what the series has in store.

According to the synopsis: “More than 70 years ago, Doe became the unwilling participant in the most famous story of the devil inhabiting a person’s soul. Catholic priests who perform exorcisms say what happened to the young boy is consistent with demonic possessions and that details of the story are true. The priests who battled the demon lurking inside the possessed boy witnessed bizarre and violent manifestations including levitation, vomiting, unnatural human strength and bloody markings on his body.”

“Now, a long-lost interview with a dying monk, who never spoke about his participation in the boy’s exorcisms, details his frightening experience of watching the boy levitate above his bed. Even more startling, another eyewitness exposes a possible cover-up in the case. This captivating documentary details how the devil himself brought forth hell upon an unsuspecting, innocent young boy.”

Related Topics:The Exorcism of Roland Doe
Up Next

‘The Queen of Black Magic’ Clip Performs Self Surgery